“In their hearts humans plan their course, but the Lord establishes their steps.” ~ Proverbs 16:9

New Years is usually not a big holiday for me, but there have been two times in my life when the idea of leaving a particularly difficult year behind has been so welcome that I have literally counted the days to New Years Eve.

January 2016 started with the first of many doctor’s appointments that would eventually lead to our infertility diagnosis. Shortly after, I found out that my job would be ending towards the end of the year. I was working in my dream job with amazing co-workers for the best boss and felt like I was really hitting my stride. It was someplace I thought I could successfully be a working mom while continuing to grow in my career. The plan was to work for a few more years, save for a house, and then gracefully bow out to become a stay at home mom, hopefully about the time baby number two came along. I had it all under control; looking for a new job while trying to get pregnant was totally not my plan.

After adjusting to the idea of saying goodbye to the job and my co-workers, and a lot of discussion and prayer with David, I still wasn’t sure how to proceed. Do we put fertility treatments and having kids on hold for a while so I could focus on finding and growing into a new job? Do we charge full steam ahead into treatments and risk the fact that getting pregnant would certainly interfere with my ability to get a job? What direction were we supposed to go?

Ultimately, we decided to leave it in the Lord’s hands. I would put my job hunt on hold for a few months while we pursued treatment. If the treatments didn’t work after a period of time, we’d put those on hold and I would focus on the job hunt. Our intended path became clear to us very quickly when after our first round of clomid, we found out we were pregnant with our baby girl! My pregnancy has definitely been a huge source of blessing in an otherwise difficult year.

Things were finally looking up, but later in the year, my sweet boss and mentor, Sharon, passed away, followed closely by another dear friend, Judy. More loss; more goodbyes. (If you’re interested, I wrote more about these women in my post “For Such a Time as This: Thoughts on our Baby Girl”).

All in all, 2016 felt like a year dominated by loss. But, when I look back, I realize it can be best summed up by Proverbs 16:9, “In their hearts humans plan their course, but the Lord establishes their steps.” I started the year with a lot of plans, holding very tightly to the way I saw my life going. But, the Lord had a different journey in mind, and I can see that through all the tough goodbyes there have been a ton of blessings.

Friendships have been deepened in ways I could never imagine; I had the opportunity to travel; I spent some absolutely irreplaceable time with Sharon and Judy in the days before they passed away; I was able to finish my dream job strong in a way I am proud of; I have been supported and uplifted by amazing individuals who I have been able to support in return; I grew closer to family; I cherished time with my husband who I love more today than I did at the start of the year; and, though it was hard at times, I spent eight months of 2016 growing a precious life inside of me.

I had my plans, but the Lord established my steps. 2016 was filled with pain, but 2016 was also filled with joy and so much love. I’m not sad to see it go, but I understand that it’s a year that needed to happen.

And with that, I look toward 2017 with great anticipation! It’s the year I’ll get to meet our baby girl, transition into stay at home motherhood (more on that in an upcoming post), and hopefully see relationships with my family and friends deepen even further. I know it will be another year filled with growth, and hopefully a little less loss. I can’t wait. 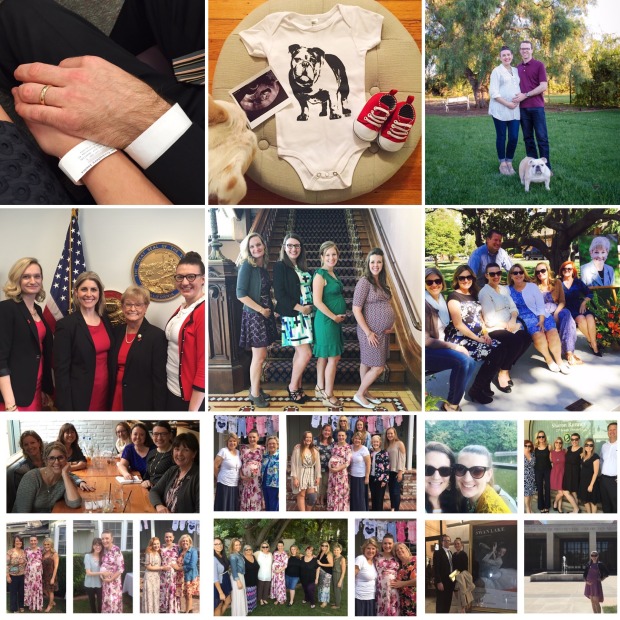