Alternative titles for this post include “I’m not Sure These are Actually Contractions” and “A Redemptive Birth Experience.”

Allow me to set the scene: On Saturday, September 14th, David’s godparents came into town to take us to dinner. I was 37 weeks and two days along. I felt extremely uncomfortable and looked like I had swallowed the world’s largest watermelon. However, baby girl was still sitting pretty high and I had been told at my doctor’s appointment just days before that I still had a ways to go.

“Who knows?” David’s sweet godmother quipped during our meal, “This could be your last dinner without the baby!”

We all laughed and I felt certain that wouldn’t be the case. I had weeks to go! Besides, didn’t my doctor just tell me that she wasn’t anywhere close to being in position yet?

Plot twist: that was, in fact, our last dinner without the baby.

Saturday night as we were putting Ellie to bed, I started feeling a lot of pelvic pain. It felt like someone was taking my hip bones and ripping them apart while baby girl was forcefully using my ribs as leverage to shove herself downward. She had always been a strong, active baby so I just assumed these were normal pregnancy aches and pains.

Later on that night I did start to feel funny–like I just needed to stop and take in everything as it was right at that moment. I asked David to stop what he was doing and sit quietly with me for a little while. I remember having a fleeting thought that maybe this was my body’s way of telling me I was about to go into labor, but I quickly dismissed it. I went to bed early to prepare myself for a full Sunday of church, a baby celebration lunch with a few of my dear friends, and dinner with one of David’s co-workers and her family.

4:30am Sunday morning, my eyes opened. I lay there in the dark for a few minutes trying to figure out why I was awake.

Do I need to go to the bathroom? No.

Do I need to roll over? No.

Am I thirsty? No.

Alright, mental checklist complete, I guess I can fall back asleep. But… ouch! What is that annoying abdominal cramp? Oh ok, it’s gone. Time to go back to sleep.

Ouch! There it is again!

You get the drill. Needless to say, it took me an embarrassing amount of contractions to start suspecting I was probably having contractions. They weren’t intense at all, but they were definitely there and definitely coming every five minutes like clockwork. I assumed they were Braxton Hicks contractions, so I got up and started walking around the house in the hopes that they would go away. They only got stronger. At that point, I decided the best thing to do was go back to bed and try to get as much rest as possible. You know, just in case. I obviously wasn’t in labor.

“Good morning! Um, let me know when you are awake enough to talk, I have a few things to tell you.”

That right there was enough to wake him up; I’m not usually that conversant first thing in the morning.

“Ok… well… I’ve been having contractions… at least I think they’re contractions… since 4:30am. They are coming every five minutes. But they are so mild! I’m sure they aren’t really contractions. I’m only 37 weeks!”

I answered his barrage of questions.

“No, I haven’t called labor and delivery.”

“Well, I figured one of us should sleep, so I didn’t want to wake you up.”

The nurse who answered in labor and delivery gave me strict orders to take a shower, eat some breakfast, drink a ton of water, and put my feet up. I was to call them back in a few hours if the contractions were still coming.

Late in the morning I finally gave in to the fact that, yes, these were actual contractions. I was in the early stages of labor! We canceled all of our plans, asked my parents to get on the road so they could be here with Ellie, and settled in for the day. I spent most of my time laboring on the couch listening to David and Ellie play in the playroom behind me. Every few minutes or so I would call to David that a contraction was about to begin and he would start timing. Talk about multi-tasking at its finest.

Right after we got Ellie down for her afternoon nap, the contractions picked up in intensity. David said he thought we needed to go to the hospital, but I wasn’t convinced. I could still talk just fine in between contractions, and my parents had barely made it past Los Angeles; it would be hours before they made it to our house.

I called labor and delivery again and they asked me to come in. The nurse said they likely wouldn’t admit me, but since I was late pre-term and had already been laboring for more than ten hours, they wanted to monitor the baby for a bit. So, we left Ellie in the care of friends and neighbors and headed out.

We pulled into the hospital around 3:30pm. I got out of the car and felt a contraction coming on. All of a sudden I heard a *pop* and doubled over in pain. The baby had kicked me so hard it felt like I had been punched in the stomach. I stood up and told David everything was fine but as I took a few steps I could feel something leaking.

“Um, this is awkward. I think my water broke? Maybe? It can’t really be that, right?”

The next thing I know I was hit with an incredibly intense contraction. They started coming one right on top of the other, making it impossible to walk and nearly impossible to breathe. Thankfully, by that point, we had made it halfway through the emergency department lobby and a nurse brought us a wheelchair. By the time we were in the labor and delivery ward a few minutes later, I was leaning over the side of the chair in extreme pain. Up until this point, my labor had been much easier and far less painful than Ellie’s, but I was starting to have flashbacks and zone out from the pain. I stood up in the triage room and felt a huge gush. Yup, that episode in the parking lot had been my water breaking.

A very upbeat midwife entered the room and asked me what I “envisioned” for my labor. I managed to gasp out “epidural” and that was about it. She checked me, discovered I was dilated four centimeters and sent us off to our room with a promise to call the anesthesiologist right away. The 30 minutes or so I was waiting for the epidural are a little fuzzy. I remember searing pain, shaking, sweating profusely. Our nurse set about getting me hooked up to everything and running the necessary tests. I turned on my side and gripped the bed rail for dear life. All I could do was breathe and repeat “this too shall pass” over and over in my head. Somehow I answered all the nurse’s questions, while David sweetly coached me through each contraction, telling me constantly what a great job I was doing.

Mercifully, the anesthesiologist finally came and my epidural was placed! It was almost instant relief and I settled happily and comfortably into my bed to wait out what I assumed was quite a bit more time before we met our girl. It was about 4:30pm.

Less than two hours later, I told David I thought I wanted to take a nap. I had been up since 4:30am and laboring for almost 14 hours at this point. I was starting to feel tired. The nurse gave me a funny look and asked, “Do you feel the urge to push?” I did not feel the urge to push at all, I felt the urge to sleep. “I want them to check you, first. The baby is really, really low.”

The midwife came in and checked me. “Yup, you are at a ten! I can feel the baby’s head, try a practice push for me during this next contraction.”

“Ok,” the midwife said. “It’s definitely time to push, I’ll get the doctor. Are you ready to meet your baby?”

David and I stared at each other in disbelief. Were we ready to meet our baby? Of course, but couldn’t we slow this thing down a little? I had barely gotten used to the idea that I was having real contractions, and wasn’t I just four centimeters a mere two hours ago?

Ready or not, she was coming!

They got the room set up and the doctor came in, the same one who delivered Ellie two and a half years ago. Ten minutes later, at 6:24pm, less than three hours after we arrived at the hospital, Lauren Poppy Kruckenberg was in my arms.

I felt blissfully aware and in control the entire time. I held my own legs when I pushed. I watched as they lifted her up and placed her on my chest. I even cut the umbilical cord myself. It was a beautiful process from start to finish and a moment I will cherish as long as I live.

When we first decided we were ready to think about welcoming a second child into our family, I prayed a rather bold prayer. I asked the Lord for a redemptive conception experience, a redemptive pregnancy, and a redemptive birth story. I wanted to look back on this time with peace and joy, not as something I needed to emotionally heal from. Nothing, and I mean nothing, on any of those fronts went according to what my plan for a “redemptive” experience would have been. But looking back on it now I see that in His infinite wisdom the Lord gave me abundantly more than I could have imagined.

Our Lauren is exactly who we needed in our family and she came exactly when we needed her. What a sweet testament to God’s grace. 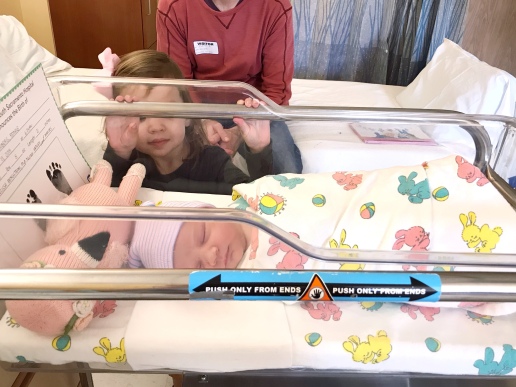